This past week Linda Aristondo was gracious enough to grant me some time despite her very busy schedule. Linda has been an attorney for several decades but does much more to make a difference. She does restorative justice work which makes her background in law very useful. This involves dismissing cases where people were arrested by the police, typically with prejudice involved. Most of these cases involve young aged black adults who have been arrested for minor possession charges. These individuals are over-policed which has led to many of their arrests.

While being arrested for something as petty as a small possession charge may seem like not a huge deal, it plays a massive role in shaping these people’s lives. An arrest can be made before a conviction as a criminal record eliminates a ton of jobs you are eligible for. Linda explained to me how many job applications will ask whether you have been arrested and not about a conviction. This leaves people with two choices, either lie and if people find out, get fired or tell the truth, and most likely not get the job. What Linda does with these cases is make a decision based on the reality of the perspective and if there are outside factors she will make a motion to dismiss the case.

Aside from her work as an attorney, Linda is involved with many other organizations that strive to help people. This includes the RDJ refugee center. This is a homeless shelter that works with people who are just coming out of detention. While there are many different types of detention the RDJ shelter specializes in people who are coming out of immigration centers. While some while return to their families not everyone has that option. These people have to go somewhere and the RDJ is one of the many shelters that help them find a place to live. The particular work that Linda does is set up asylum claims for people who don’t have one. Asylum claims are for people facing prosecution in other countries, but with the claim are provided internal protection in the United States. Most people at the RDJ are seeking asylums as they have been persecuted for their gender/sexual orientation or from fleeing local gangs. Linda noted that while this is not the last step for these people, there are several success stories within the shelter of people making a life for themselves after they leave.

Linda also sits on the board of an organization that provides shelter for undocumented women and their families. These women are people who have suffered domestic violence and became homeless as a result. Linda said that the organization all speaks Spanish and understands the culture intending to need to protect people from their abusive partners.

Linda was always interested in this type of profession as it directly relates to her. She is a person of color who values social justice and knew she needed to advocate on the behalf of her people. With all the marginalized and disenfranchised people she has helped, she understands the importance of her work. Since she looks like the people she serves, there is a cultural reference and a level of trust between her and the people she tries to help.

Unfortunately throughout her career, Linda has had to overcome a great deal of prejudice. She said that many (white men) in her field will discriminate against her because of her skin color. They see her more as a helper as she typically ignores them and they become embarrassed when they realize how qualified she is.

In the future, Linda hopes to continue her efficacy work but add another level to what she does. The one message she wants people to hear is that you don't need to be an attorney to help. The best thing you can do is have a good heart and give your time to people in need. 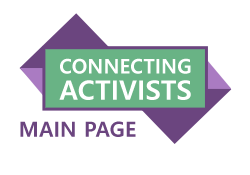