Ralph Fasanella (1914–1997) was a self-taught painter whose body of work represents one of the most compelling artistic critiques of post-World War II America. His paintings—bold, colorful, loaded with detail yet unified in composition—speak powerfully of a distinct working-class identity and culture, and of the dignity of labor. They capture the past and express hope for the future. 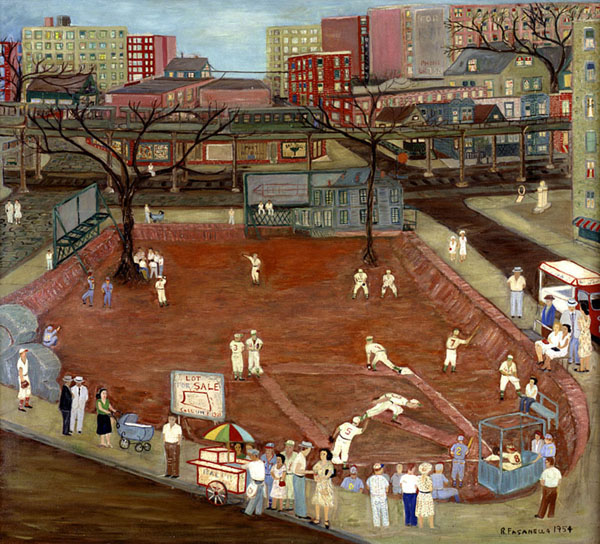 Fasanella had an artistic vision born of a working life. A child of Italian immigrants, he spent his youth delivering ice with his father and enduring the harsh regimen of a Catholic reform school. During the Depression, Fasanella worked in garment factories and as a truck driver. From his mother—a literate, sensitive, and progressive woman—Fasanella acquired a social conscience. This was the period when the rise of fascism represented a growing threat to both democracy and trade unionism, and through her influence, he became active in anti-fascist and trade union causes. 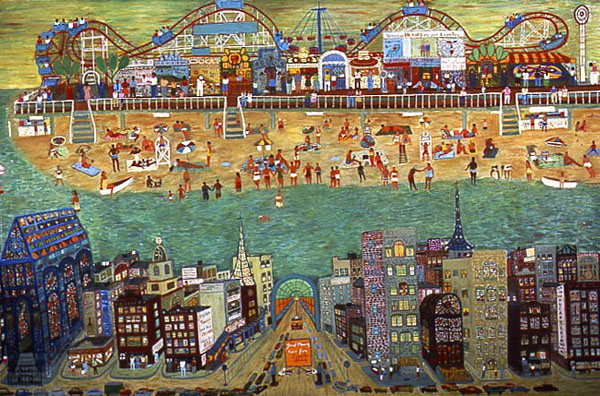 Soon after he began to paint in 1945, Fasanella mastered a style that allowed him to communicate visually with workers. He captured a profusion of familiar details, boldly showed interiors and exteriors simultaneously, and combined past, present, and future. Fasanella’s art became the visual equivalent of street talk—direct, opinionated, improvisational, and passionate.

In his paintings, Fasanella sought to provide a blueprint for humankind to change the world. Fasanella’s America—the one he never found but never stopped searching for—lay between memory and vision, between loss and hope. Realizing the promise of America required understanding and acknowledging our heritage, sorting out its best qualities, celebrating its triumphs, and memorializing its losses. In merging the interests and values of the individual with those of the collective, Fasanella transforms his family into ours and his street into ours and permits us to share his vision of a humane, democratic America that values both culture and community.

Labor Arts would like to thank Paul S. D’Ambrosio, Chief Curator of the New York State Historical Association in Cooperstown, New York, who contributed much of the text for this exhibit, and Marc Fasanella, whose enormous dedication to his father’s artistic legacy helped make this exhibit possible.