Freedom Riders meet with the ILGWU, 1961. 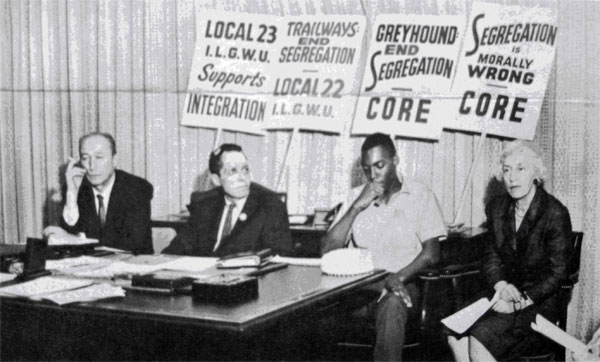 Corelator, Newsletter of Congress of Racial Equality, May 1961.

The ILGWU responded without delay to early requests from the Congress of Racial Equality (CORE) for assistance with the initial sit-ins in April 1960. Here, International Vice President Charles Zimmerman, Chair of the AFL-CIO’s Civil Rights Committee, meets with freedom riders James Peck and Hank Thomas. On the right is noted author Lillian Smith, whose best selling 1944 novel Strange Fruit speaks strongly against segregation and racism and lynching in the south.

Peck was still nursing the wounds sustained when Klansmen burned the bus in which the riders were traveling in Anniston, Alabama.

The union contributed money and, perhaps more important, put the full force of its members, prestige and power behind the effort to integrate public accommodations in interstate commerce.