At work in the health center record room, circa 1980s. 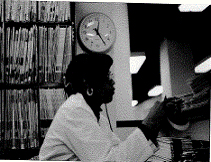 Before its records were computerized, the union’s health center record room was located on the 26th floor at 275 Seventh Avenue. To get some idea of what computerization has meant, records were maintained by six women while an additional ten women were involved in pulling them from the files. Today, the electronic records of six thousand active members and three thousand retirees are available via computer.