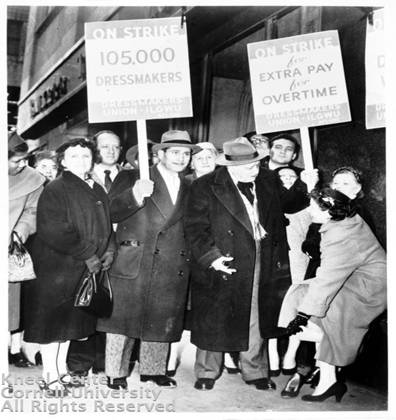 The large majority of local unions of the ILGWU embraced all ethnic and religious groups. However, some tended to attract members of a single nationality or ethnic group. Local 89, the Dressmakers Union, was predominantly Italian. Luigi Antonini, its Manager, became the first Vice-President under President David Dubinsky in 1934. Antonini was an organizer of the Italian-American Labor Council and a respected leader of the Liberal Party as well. Here he acknowledges a weary picketer on the line with her co-workers and the Local’s male leaders.