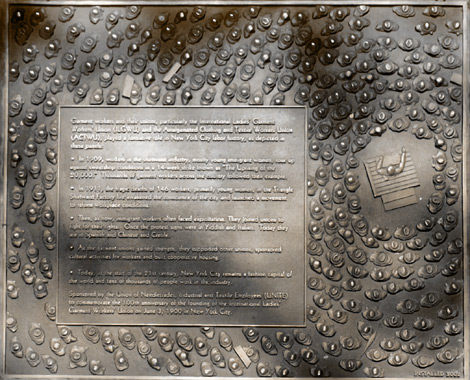 Commissioned by UNITE (formed by the merger of these two unions in 1995), these plaques were designed by the artist Gregg Lefevre, in collaboration with the union and the Parks Department, and are based on historical images and research.

The plaques are a special part of a larger project to commemorate the history of Union Square with a timeline of historical plaques installed in a circle on the perimeter of the square. The first stage of that project is complete, starting with a plaque on the east side of the square that shows Native American Settlements on Manhattan Island and ending with a plaque on the west side of the square that commemorates the first labor day parade in 1882. The labor history plaques depicted in this exhibit will eventually be incorporated into the second half of the timeline, which will cover the twentieth century, and complete the circle around the park. 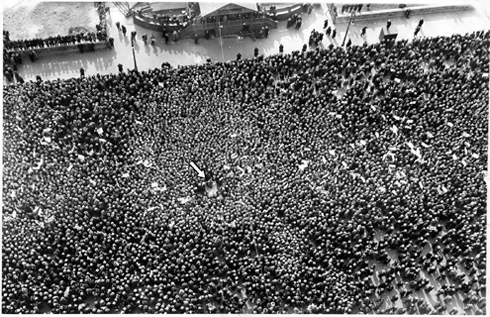 This plaque was inspired by a well-known image of a demonstration in Union Square on March 6, 1931. The original caption was: “NEW YORK’S CRIMSON FRONT! One of the worst riots of its kind resulted along the communist front, Union Square, New York City, when police re-enforced by firemen and detectives dispersed with much injury Communists demonstrating against the unemployment situation. Photo shows the greater part of 40,000 Reds who gathered in Union Square, for the attempted march on City Hall, which was frustrated by police.” 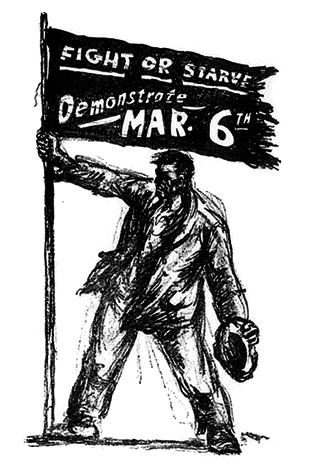 “Fight or Starve” reads a tattered flag held high by the workman in this Fred Ellis drawing. The worker, cap in hand, is urging the unemployed to demonstrate in Union Square on March 6th, 1930. The demonstration, organized by the Trade Union Unity League and the Communist Party, was one of the largest ever held in the Square, and conflicts between the police and protesters led to arrests, a court case, and renewed public support for the right of assembly in this park. Estimates of the crowd ranged from 30,000 to 100,000.