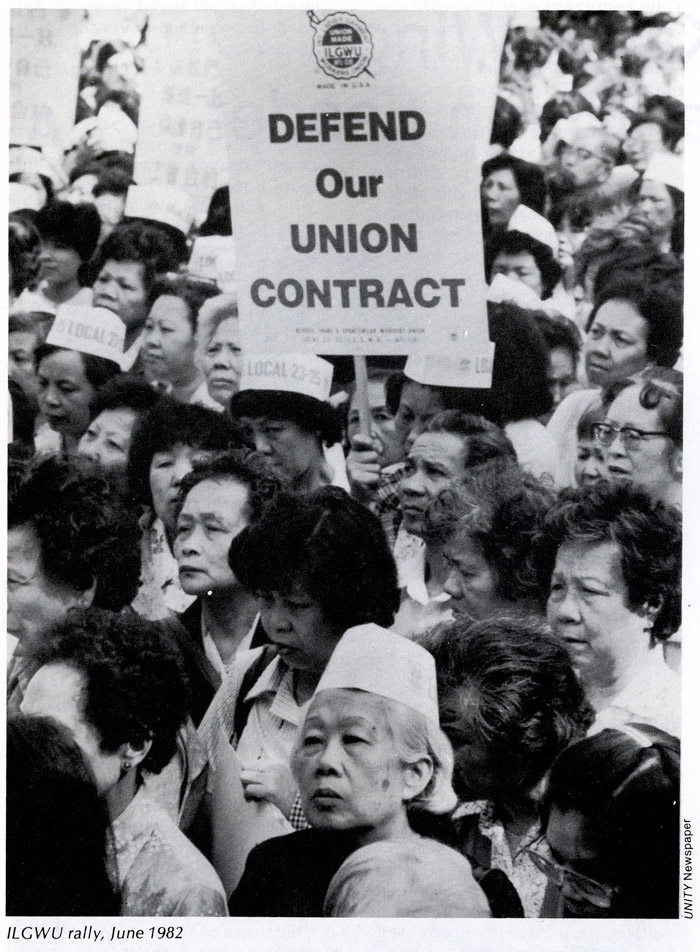 WE ARE ONE was the rallying cry during the brief but successful strike in summer 1982 when 20,000 members of Local 23-25 of the ILGWU – most of them Chinese immigrant women – walked off the job in protest.

Watch a five minute video introduction to the story here.

We invite you to visit the exhibit about the strike at Columbia University’s Center for the Study of Ethnicity and Race (on view until May 2023), and to view recordings from 40th Anniversary events.

September 2022 – May 2023: “We Are One” photo exhibit in the gallery at Columbia University’s Center for the Study of Ethnicity and Race, 420 Hamilton Hall. Curated by Rachel Bernstein and May Ying Chen, designed by Megan Waldau Chang. Open to the public November 7, 2022 – May 4, 2023, Monday – Thursday 11am – 3pm. To schedule a group visit contact cser@columbia.edu. Flyer available here.

May 2: Chinatown Heroes – Virtual book Launch and 1982 Strike Retrospective. Writer and scholar Winifred Chin in discussion with veterans of the strike, including Katie Quan, Muzaffar Chisti and Edgar Romney; and retired ILGWU leader and translator of the book May Chen in discussion with with Silvia Chan and Mei Lum. Event recording available here.

June 7: “We Are One: The 40th Anniversary of the 1982 Chinatown Garment Workers Strike,” a workshop at the Tenement Museum. Event recording available here.

September 22: Opening reception for “We Are One” photo exhibit in the gallery at Columbia University’s Center for the Study of Ethnicity and Race, 420 Hamilton Hall. Featuring a poem about garment workers by poet huiying b. chan. Flyer available here.

October 19: “Celebration Our Roots” with artist/singer Taiyo Na, singer Treya Lam, and a panel of scholars and veterans of the strike including Mae M. Ngai, Vivian Louie, Donald Kwan and Amy Chin discussing the “We Are One” exhibit on display at Columbia University’s Center for the Study of Ethnicity and Race. Buell Hall, Columbia University. View the event program and flyer. Recording available here.