Immigrants and their children were a majority of the population in New York City at the beginning of the 20th Century, and though restrictive immigration laws drove this percentage down in the middle decades, by the end of the century they were again in the majority. 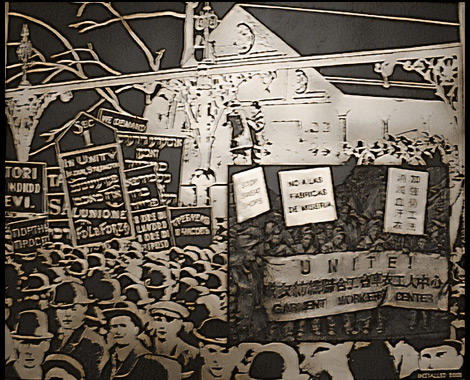 Then, as now, immigrant workers often faced exploitation, and they joined unions to fight for their rights. Living and working in and around Union Square, they often protested in the square, particularly in the first half of the century. Once the protest signs were in Yiddish and Italian. Today they are in Spanish and Chinese and Creole.

The center sign in this early 20th-century rally in Union Square reads “In Unity is Our Strength” in English, Yiddish, and Italian. Plaque designer Gregg Lefevre captured the rally by combining two images of the same rally; this one provided the signs in his final design, and the following one provided the crowd itself. 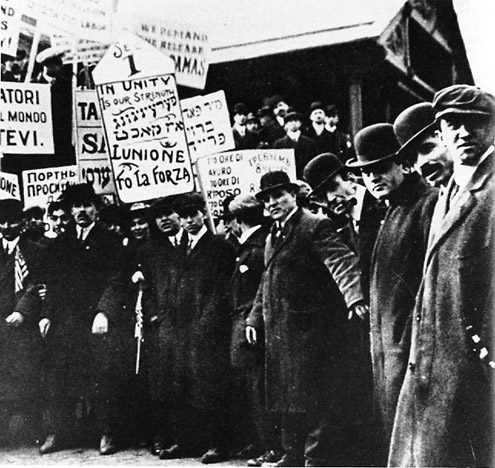 This bareheaded man, listening intently to a speaker in Union Square, probably during a demonstration, stands out in the crowd of listeners.

The sight of fathers carrying their children on their shoulders was not unusual at May Day Parades, such as in this picture, taken during the 1936 parade by John Albok. The marchers are marching along Eighth Avenue to 17th Street, where they turned east and marched into Union Square. 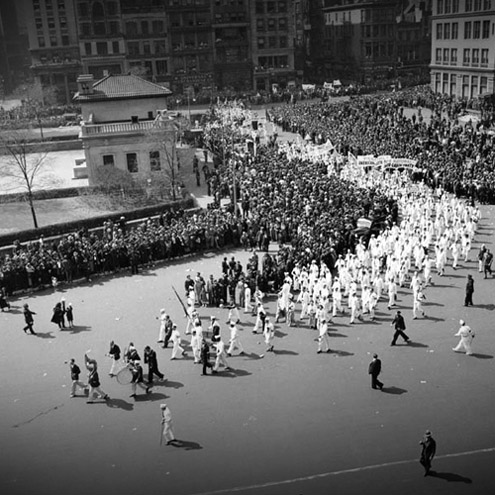 Tens of thousands of people marched in the annual May Day parades in Union square during the 1930s.

A poster by the artist Paul Davis commissioned for the founding convention of UNITE in 1995 and signed by many of the people at the convention. UNITE was created when two nearly century-old unions representing workers in the garment industry—the International Ladies’ Garment Workers’ Union and the Amalgamated Clothing and Textile Workers Union—joined forces. 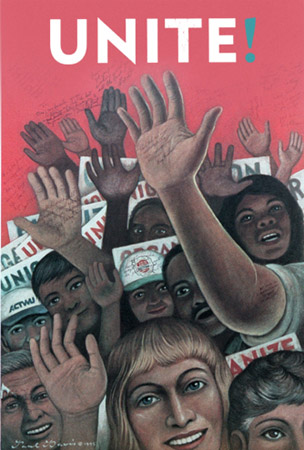