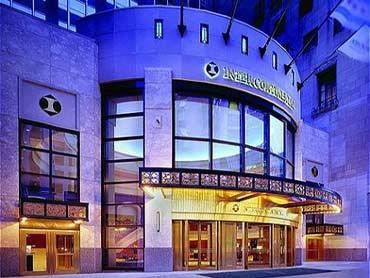 A landmark hotel, originally built in 1929, the Medinah Club is now restored as the Chicago Intercontinental Hotel (pictured above).

In its previous incarnation, it was built as the Medinah Athletic Club, a luxury men’s club for members of the Shrine Organization.

The Medina Club was scheduled to be the site of the 1934 ILGWU National Convention. However, the union shifted its meeting from the Medinah Club when the club refused to serve black (then termed “Negro”) delegates. It would not permit them to use the front entrance and the rest rooms, and it even refused to permit them to ride the elevators. It should be remembered that this was during the pre-World War II period when the ILGWU’s black membership was nowhere near what it was to become in later years.

ILGWU President David Dubinsky reacted quickly when he learned of the hotel’s policies. He triumphantly led a motorcade of African-American and white members from the hotel to a new location at the Morrison Hotel.

Another example of the seriousness of the union in defending civil rights was the hiring of African-American Frank Crosswaith as an organizer in the 1930’s. Crosswaith was an outstanding orator, and founder of the Negro Labor Committee which operated out of the Harlem Labor Center.