Union members demonstrate for the ERA in Western Pennsylvania in 1978. 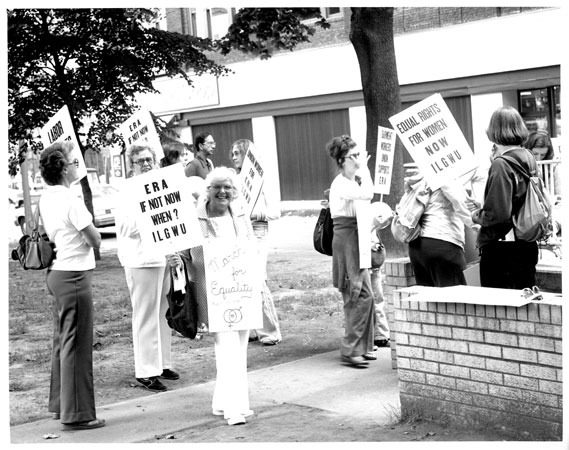 The expansion of women’s rights within the ILGWU and the larger labor movement has been an issue of concern from the union’s earliest years. The union, like the rest of the labor movement and even the Women’s Trade Union League, opposed the Equal Rights Amendment ( first introduced in 1923) during the 1940’s because it challenged laws protecting women regarding prolonged hours of work and poor working conditions.

In the 1960s opposition to ERA began to decline in the wake of court decisions that Title VII of 1964 Civil Rights Act prohibiting race and sex discrimination overturned protective laws. Unfortunately, the Equal Rights Amendment did not garner the necessary votes to amend the US Constitution and it died in 1982, three states shy of ratification.

In this photo members of an ILGWU District Council continue the tradition of activism and protest as they demonstrate in support of the ERA in Western Pennsylvania.