Union Quilts: “Unite and Fight” #1, first in a series of three quilts with historic photographs made for the ILGWU convention in 1995. 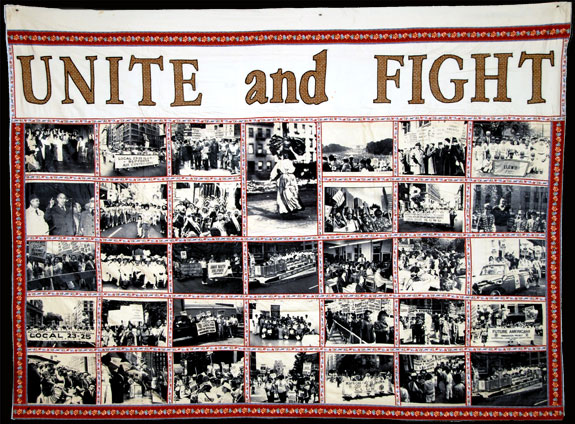 This is one of many quilts made during the 1980s and 1990s by Kathy Andrade for the garment workers union’s national convention.

In the early years, Andrade sent requests to ILGWU locals across the country asking that they send in photographs about the history of their union. Only a few locals found time to respond, and Andrade recalls that most of the submissions were the kind of formal shots of speech making and handshaking that characterize union photo collections—and that fail to bring union history to life.

Convinced that livelier images could tell the story and have a much greater impact, Andrade started to fill in the gaps with photos taken by photographer George Colon,

and historic photos she would find stashed away in closets in the union’s headquarters, or even in discarded piles on their way to the dump.

The historic photographs range from a classic 1910 Lewis Hine image of an immigrant woman on the lower east side at the turn of the century striding down the street with a large bundle of piecework on her head, to images that

capture historic moments in the union’s history throughout the 20th century.

Andrade’s eye for the powerful image is uncanny. These quilts (seen by Labor Arts for the first time only recently, and never seen by historians of the union) incorporate many images used to illustrate histories of the union in recent decades.